Finally! Spring is here and the garden is coming back to life. Shrubs and trees are starting to develop shoots and the first colourful flowers stretch happily towards the sun. Now there’s a lot to do in the garden again. Great! 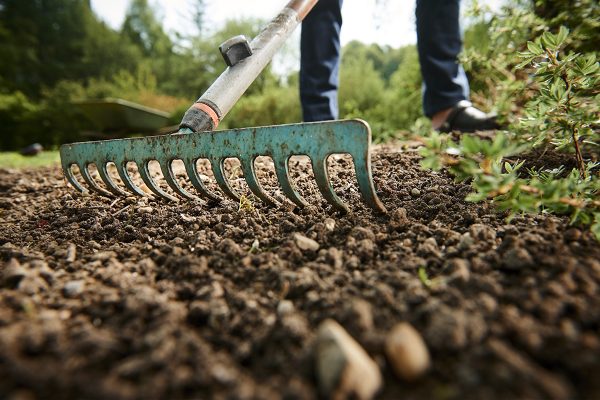 TIME TO DIG UP THE SOIL

When the stubborn frosts are over, you should start loosening up the soil in the garden. This makes it easier for soil organisms to produce valuable humus. You need to use a fork for this. Stick the fork into the ground and work it back and forth a bit. Then gently pull it out of the ground and continue in another spot. This method ensures that the soil is well ventilated, without harming its tiny inhabitants. Think about it: each layer of earth is home to many little creatures and each one of them has its own special task.  This stable structure must not be destroyed. That’s why you shouldn’t dig up the soil with a spade, just work it with a fork. A tip: before you start, dig a small hole in the ground with a spade. If water collects there, it means that it’s too early to start cultivating the soil. Another sign is if your footprints are still visible on the ground long after you have walked there. If none of this happens, you can continue. 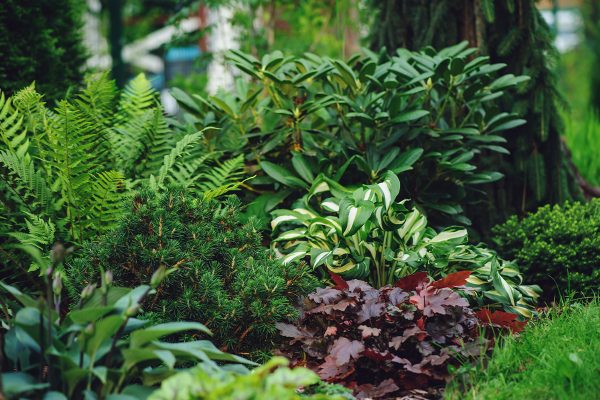 In the autumn, you probably left some perennial stalks in the flowerbed, for good reason. During the winter, the birds could satisfy their hunger with seeds from the flower stalks. Now the withered plants have served their purpose and can be removed. After all, new shoots are already sprouting in the soil. Before the new plants can really spring up, you need to cut off the withered perennials near ground level. The frost may have pushed the perennials you planted last autumn out of the ground slightly. You can now gently push these into the soil again. Next, make sure to water the plants properly. If there’s no more risk of frost, you can also remove the leaves and twigs that were used as winter protection for the perennials. It’s best to not to wait too long to do this, otherwise there’s a risk that the plentiful new fragile shoots and buds will be damaged when you clear the flower beds. 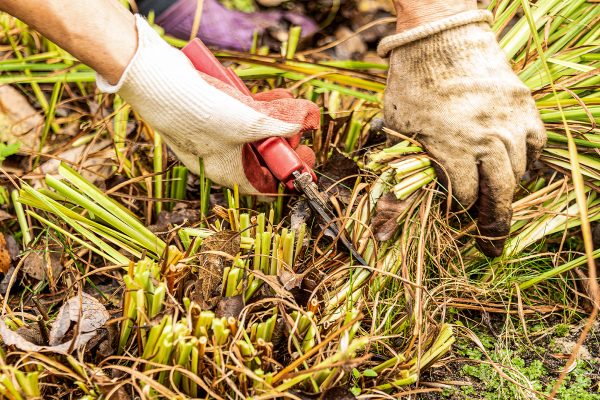 The best time to divide perennials is just before budding in the spring. The first step is to cut off all the wilted material a hand’s distance up from the ground. Then carefully lift the perennial plant out of the soil using a fork. Next, carefully divide the root ball into several parts with a knife or with a sharp shovel. Cut off any dried root parts, put some compost in the new planting hole, put in the perennial plant, add some soil on top and you’re done. Tip: divide only perennials that bloom in summer and autumn at this time. Perennials that bloom in the spring are best divided in the autumn. 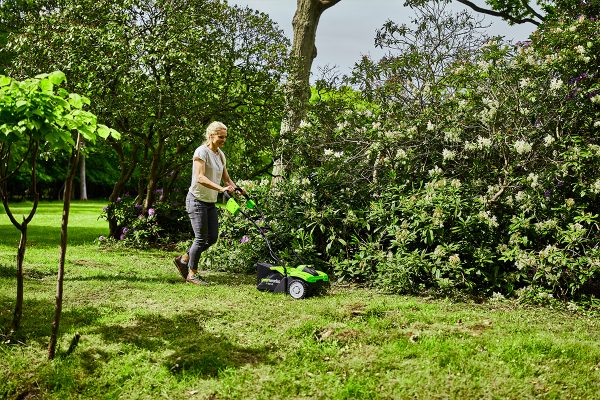 TIME TO START TAKING CARE OF THE LAWN

When March is looking its best, we can start taking care of the lawn. The lawn should be limed, fertilized and scarified, in that order. When the risk of frost is over, you can generously cover the whole lawn with lime.  After two weeks, the grass will have grown so much that you can mow it. Then you can scarify the lawn, to prevent the parts of the plant that have withered during the winter making it difficult for the new budding grass shoots to get enough air and light. But be careful: the blade of the scarifier shouldn’t go deeper than 3 to 5 millimeters into the ground. Otherwise, the grass roots risk being damaged. Also, the scarifying should be done in a grid pattern – once horizontally and once vertically.  If there are any larger bare spots, just sprinkle a little grass seed over them, press down with your shoes and water thoroughly. Now it’s time for the fertilizer. 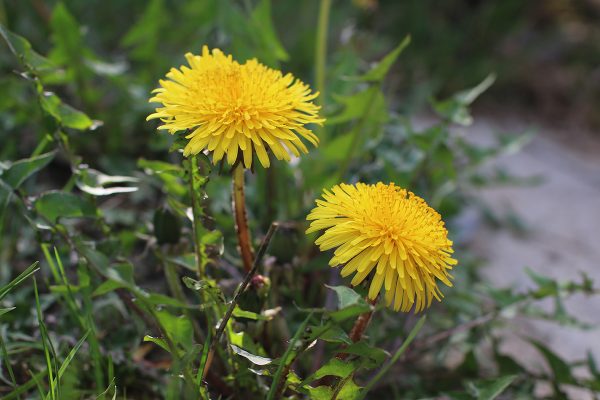 What is it they say? The early bird catches the worm…and if you start removing weeds early, you’ll have less to do later. The weeds are still a bit tired after the winter and can be removed easily. This is especially true when it comes to weeds that have strong roots, such as dandelion and ground elder, where you must remove the entire root. Even if there’s only a small piece of root left, there’s a risk that the weeds will grow back. It’s easier to get rid of weeds that wither after flowering and seed formation. If you remove them now, you can prevent weeds like chickweed and white clover from blooming and producing seeds. If the weeds have already seeded and spread, it helps if you work the soil in the flowerbed with a hoe. You also aerate the soil when you loosen the top layer of soil – killing two birds with one stone! 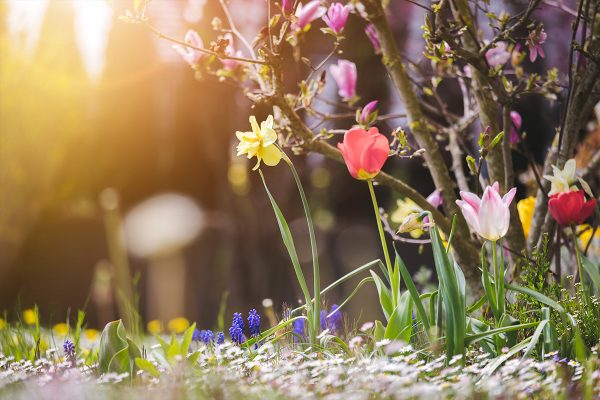 TIME TO FERTILISE THE BULBS

If your bulbs are growing sparsely or blooming less and less, then you need to fertilize them. This applies especially to plants that need a lot of nutrients, such as daffodils, tulips and hyacinths, which do better after an extra portion of food. It’s best to give the plants a fast-acting mineral fertilizer, for example an NPK fertilizer such as Blue Grain, as soon as the first green leaves appear. But don’t overdo it – one tablespoon per clump of daffodils is enough. You can cut the stalks of plants that have finished flowering, but the leaves should remain as long as they are green. They provide the bulb with new nutrients. 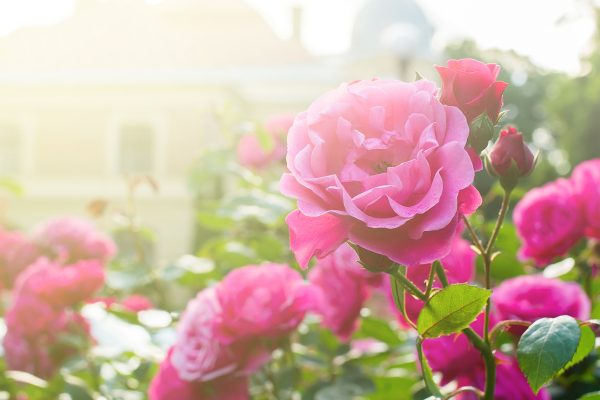 When the forsythia is blooming, it’s time: All remounting roses, those that bloom throughout the summer, should be pruned heavily at this time of year. Then they will bloom magnificently during the coming summer. Remove frost-damaged, diseased and weak shoots from flower bed roses and stem roses.  Then prune the healthy shoots back to three or five buds. Next fertilize the roses with plenty of compost. Tip: all roses will be happy when you add ‘effective microorganisms’ (EM) to the soil. These are available as a mixture in a bottle which you can pour over the flowerbed while you’re watering. 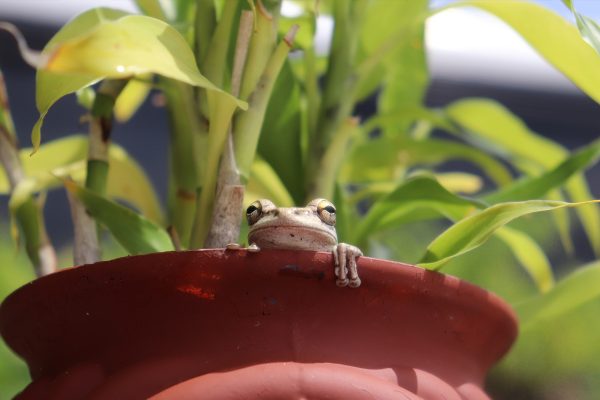 PLEASE DO NOT DISTURB!

Frogs like to play in shallow and calm water. With a little bit of luck, they’ll choose your garden pond. If they do, leave them alone and wait to clean or plant in your pond. Just wait till next month, as all the tadpoles should have hatched by then. Lots of the garden’s inhabitants – such as hedgehogs, bats, dormice, snakes and butterflies – are now slowly waking up from their hibernation. If you clean your garden too thoroughly after a long winter, you might disturb them in their hiding places. At this time of the year, the animals are still weak and are only slowly beginning to come back to life in the new garden year – keep this in mind and be careful. After all, the garden doesn’t have to look perfect just yet.